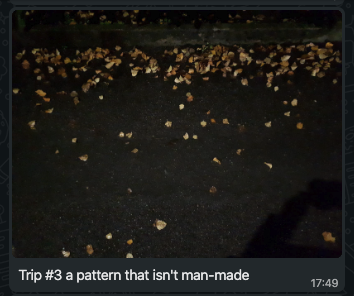 Although I still have lots of work to do on the visuals, I sent out an absolute bare-bones version of the cards containing the prompts I listed here to a friend of mine who is a Service Designer and Creative. She used the cards on a series of walks, and then gave me some feedback.

I really like this idea of categorising them – perhaps this could be done by colour coding or having a different shape or size of card for each category.

Cards I couldn’t do:

– something out of place – could be argued that weeds are out of place but I dunno, I feel like everything is where it should be? Haha maybe there’s something existential stopping me from doing that one.

– intention path – Google didn’t tell me what this is, unless you meant a spiritual path??

– body of water – not well enough for this

– landmark- not well enough to walk to somewhere tall

– something enclosed – at a stretch, the weeds and grass growing out tarmac are sort of enclosed – I looked but i couldn’t find anything better

Perhaps these need rewording. I have sent the cards to a few other people so I will see what they say. Also, the deck I sent to Lior had text only, no imagery, so it’s quite possible that the final cards would be clearer.

I had intended the wording to be ambiguous enough to allow the user to interpret the cards however they like – eg a ‘body of water’ could be a lake, a river, a garden pond, a puddle. Perhaps this could be made clearer in the instructions rather than changing what was actually on the cards?

Didn’t have time for:

– street with natural name: would require a bit more energy for walking round

– construction site/empty lot (again, might still do this one) and would a car park count?

This is all totally understandable – I suppose what it shows me is that for any further aspects of this project it’s important not to impose a restrictive time frame. However…

Having a time limit helped me get on with doing it

Should I add a time limit to some of the cards? Add suggestions for time limits to the instructions?

‘Take notice’ is one of the 5 ways of well being according to the new ecomomics foundation, and this was about that – taking notice of the environment.

This is a really helpful reference which I will explore more in a separate post.

It was pleasant to look at the environment more carefully. It’s residential so i normally would just look at the houses, and I still did appreciate the pretty houses and windows, but I also paid a bit more attention to natural things. I also looked at trees more carefully, and stopped under them and looked up, without taking photos

So by one measure, the cards were successful – I influenced (however temporarily) Lior’s relationship with her surroundings and made her notice more of the ‘natural things’ around her. However, another goal is to build up a catalogue of art created by users. Lior took photos in the moment but currently hasn’t gone any further, and I’d like to know what might motivate her to do something with her research.

I realised after reflection that there is more I would like to know about her experience. I didn’t ask for any specific feedback, but now have some questions